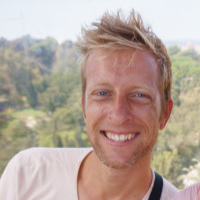 Michael, the man behind Suahuatica, grew up on a sailing ship called the “Lancha”. His parents sailed and lived with him in Portugal, Spain, Italy, Greece and Turkey in the 90’s. These days he can be found anywhere the seas are deep, clean and there are interesting underwater formations to be explored.

With a profound fascination and love for the female form and human interaction with the medium of water he creates dreamy images that transport you to an other dimension. He is currently in Cyprus where he will spend most of 2021, while in winter time he will head to more tropical parts of the globe . Michael specializes in underwater art & seaside swimwear photography, as well as guided cave/cenote exploration.

He studied Documentary/Art photography on the Royal Academy of Arts in the Hague, obtaining his Bachelor in 2009. Although initially drawn to fine art and documentary subjects, he finally combined his passion for the ocean and his academic formation in 2015, when Suahuatica was born.